get to know Nuñez 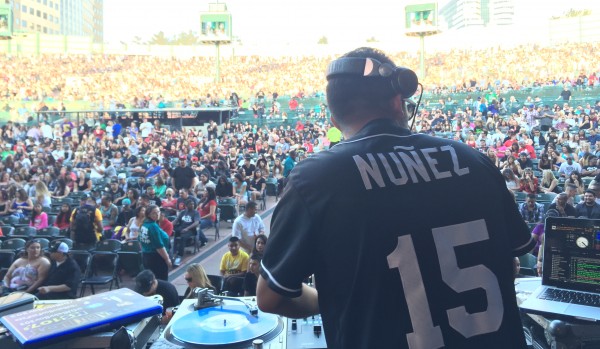 DJ Nuñez (Noon-yez) was born in Colorado on a hot summer morning, and once he reached the age of 15, he knew what his life plan was. Nuñez got into music at the young age of 15, when he would often see his older brother and cousin take turns DJ-ing. Finally they let Nuñez DJ and take turns as they did. From here on out, he knew what his passion was, music. Little did he know he would become one of the best open format Denver DJs to hit the scene.

At this time, he joined the RadioBums Record Pool and started meeting different people and building networks. Among these people were Denver, Colorado DJ, DJ Chonz, DJ Sabotage, Jay Jones, and so many others. After graduating high school, Nuñez went to Colorado State University to pursue a degree in Communication Studies. Little by little Nuñez would be working on getting his name out. Nuñez was called in to DJ at his first venue as a resident DJ at Club 101 in Boulder, Colorado in 2007. At Colorado State University, he has been able to get gigs through many organizations and parties on campus. After his first year at CSU. Nuñez moved to Ft. Collins where he became involved in doing street team work for, DJ Sabotage. Often he would open for Sabotage on nights where he DJed at the number one nightclub in Ft. Collins.

It was hard for Nuñez to keep up with the music industry since he was still on vinyl and record companies weren’t releasing music on wax as much as before. In the fall of 2008 he finally got what he needed, Serato. A program that would allow Nuñez, as many other DJs, to DJ with mp3s but still incorporate his beloved turntables. Little by little Nuñez would be building his career as a DJ. In February 2009, Nuñez released his first mixtape and many more would follow soon after. Nuñez added full video mixing to his sets in 2010. And in July of 2010, Nuñez was approached by the RadioBums, one of the biggest and well known DJ crews in Colorado and was welcomed in as a member of the Denver DJ Crew, the RadioBums.

In early July of 2012, Nuñez took his status to another level when he was invited to play at Club VUDU in Cebu, Philippines. This gig launched Nuñez from a hometown DJ to an international icon. Representing Colorado and the US as a whole, Nuñez blew the crowd away with his flawless sets. Nuñez would visit several times after that!

Later in July of 2012 Nuñez expanded his listener and support base when he got hired on to spin for the top commercial radio station in Denver, KS 107.5. Not only is he busy working in the clubs, but now listeners can tune in and listen to Nuñez on-air Friday Nights from Midnight to 2am.

In 2014, Nuñez breached the Las Vegas scene when he played at Eyecandy Lounge inside Mandalay Bay becoming a resident DJ in the Las Vegas Circuit, and becoming the newest member of the DefTal talent roster.

Some of the venues that Nuñez has played include;

Being young and having many notable successes, Nuñez says, “I have a lot ahead of me, and I have big plans.”

Warning: count(): Parameter must be an array or an object that implements Countable in /home/customer/www/djnunez.com/public_html/wp-content/plugins/simply-instagram/simply-instagram-functions.php on line 90

Warning: count(): Parameter must be an array or an object that implements Countable in /home/customer/www/djnunez.com/public_html/wp-content/plugins/simply-instagram/simply-instagram-functions.php on line 93